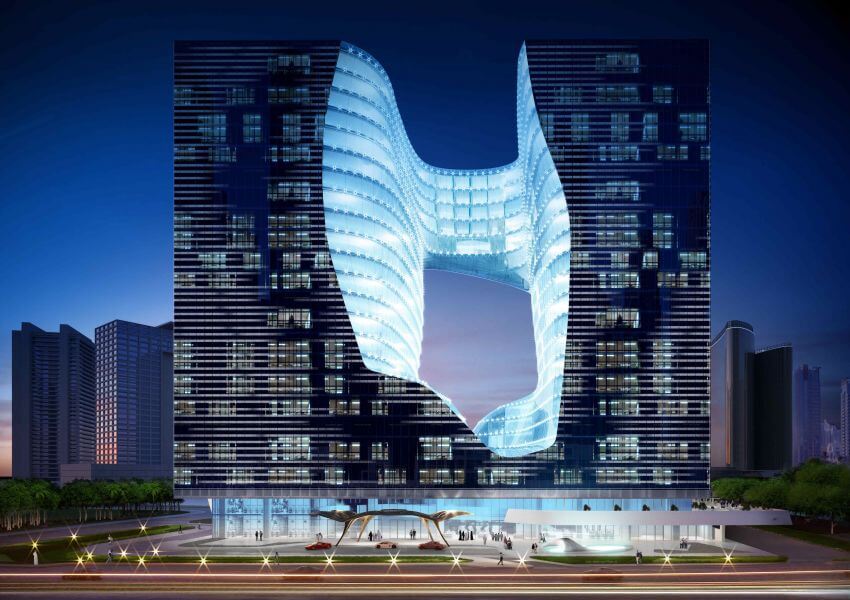 Zaha Hadid designed a hotel in Dubai which has reached completion with an astounding 8 story hole in the middle of the hotel. The inspiration is said to be derived from an ice cube melting under the sun, which is one of Zaha’s many original designs.

Dubbed the Opus is expected to open its gates next year. The Opus is a 20-story building with 56,000 square feet of office space, 12 restaurants and a hotel all built into one building. ME by Melià – the luxury travel company, is said to hold operations of the Opus.

The Opus is designed in a geometric yet asymmetrical pattern with the exterior having straight geometric lines and the middle showcasing a hole with curved and wobbly lines. This eye capturing hotel is set to be one of the many attractions where tourists and residents can get themselves a pretty picture.

The building’s architecture started out with two towers which later was fused together to create a square with a curved hole in the middle. The hole, rather than being filed was left as it is and a 4-story atrium was added to the ground floor. Another 3-story bridge was added 230 feet above the ground which then gave the hotel the marvellous melting ice cube in the middle.

The interiors of the hotel were also designed by Zaha Hadid’s architects and the 100-room hotel is said to have 4 penthouses, private balconies, bespoke furniture and designs which portray the Opus’s unique design.

The Opus is adjacent to the Burj Khalifa which gives the hotel a lot to live up to in terms of expectations. This was one of the four ZHA projects that were shortlisted for the 2019 World Architecture Festival Awards and it looks like the award will be a well-deserved one.

Share
Disclaimer: The stories are a work of fiction based on facts. Identies and details may have been altered to suit the narrative.